The EMV liability shift has been in place for nine months now, and stations that missed the April 2021 deadline to install chip-based payment readers at the pump are starting to see the repercussions of not upgrading. Chargebacks have tripled since January — and those costs have now become the liability of the station owner.

Issues with the liability shift are increasing – in value and frequency According to Conexxus, fraudulent charges cost card issuers an estimated $400 million per year, and on average, $201,000 per store per year. Chargebacks have grown over 200 percent since January of 2021 and the percentage increases every month. While
the frequency has astronomically grown, the average chargeback cost has also surged by 40 percent. Higher gas prices across the nation can attribute for some of the growth, but the liability shift is suggested to have contributed to the majority. The average chargeback jumped from $50 to $70 between January and May of 2021, or an increase of 7 percent monthly. In October, the average chargeback is estimated to be more than $90 per fraudulent transaction. Some stations are seeing significant fees from both chargebacks and brands if they have not yet upgraded their pumps for EMV. 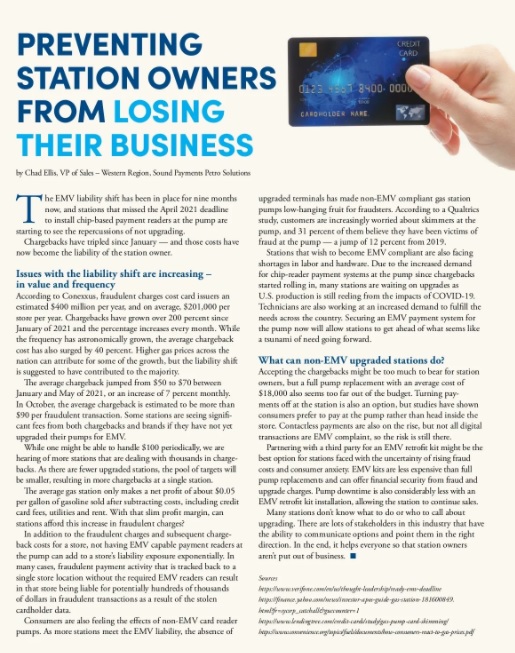 While one might be able to handle $100 periodically, we are hearing of more stations that are dealing with thousands in chargebacks. As there are fewer upgraded stations, the pool of targets will be smaller, resulting in more chargebacks at a single station. The average gas station only makes a net profit of about $0.05
per gallon of gasoline sold after subtracting costs, including credit card fees, utilities and rent. With that slim profit margin, can stations afford this increase in fraudulent charges? In addition to the fraudulent charges and subsequent chargeback costs for a store, not having EMV capable payment readers at the pump can add to a store’s liability exposure exponentially. In many cases, fraudulent payment activity that is tracked back to a single store location without the required EMV readers can result in that store being liable for potentially hundreds of thousands of dollars in fraudulent transactions as a result of the stolen cardholder data.
Consumers are also feeling the effects of non-EMV card reader pumps. As more stations meet the EMV liability, the absence of upgraded terminals has made non-EMV compliant gas station pumps low-hanging fruit for fraudsters. According to a Qualtrics study, customers are increasingly worried about skimmers at the pump, and 31 percent of them believe they have been victims of fraud at the pump — a jump of 12 percent from 2019.

Stations that wish to become EMV compliant are also facing shortages in labor and hardware. Due to the increased demand for chip-reader payment systems at the pump since chargebacks started rolling in, many stations are waiting on upgrades as U.S. production is still reeling from the impacts of COVID-19. Technicians are also working at an increased demand to fulfill the needs across the country. Securing an EMV payment system for the pump now will allow stations to get ahead of what seems like a tsunami of need going forward.

What can non-EMV upgraded stations do? Accepting the chargebacks might be too much to bear for station owners, but a full pump replacement with an average cost of $18,000 also seems too far out of the budget. Turning payments off at the station is also an option, but studies have shown consumers prefer to pay at the pump rather than head inside the store. Contactless payments are also on the rise, but not all digital transactions are EMV complaint, so the risk is still there.
Partnering with a third party for an EMV retrofit kit might be the best option for stations faced with the uncertainty of rising fraud costs and consumer anxiety. EMV kits are less expensive than full pump replacements and can offer financial security from fraud and upgrade charges. Pump downtime is also considerably less with an EMV retrofit kit installation, allowing the station to continue sales. Many stations don’t know what to do or who to call about upgrading. There are lots of stakeholders in this industry that have the ability to communicate options and point them in the right direction. In the end, it helps everyone so that station owners
aren’t put out of business.